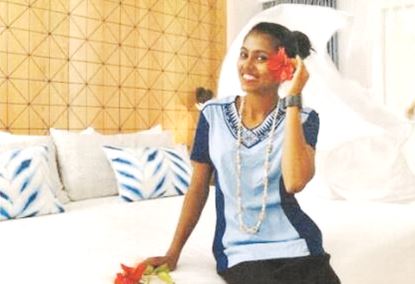 Afrana Khan is a former Lautoka Special School – Vocational student who graduated with a certificate in housekeeping in April 2017. Afrana did not complete her primary school education due to the financial difficulties and recurring social problems within their household. She was only a little girl when her father abandoned her mother and her three other siblings.
Afrana started begging with her mother and believed that this was their only means of survival.
In 2015, we encouraged Afrana to take up vocational training at the Lautoka Special School. This was because she had very little literacy skills and a prerequisite for a mainstream vocational school was at least form four level education.

The rest was history, Afrana did very well in school. She was awarded best all-rounder student. During her course of study, the school placed her on attachment with the Radisson Blu Resort in the housekeeping department.

Afrana’s hardwork and positive attitude, secured her a permanent post in the department.

In November 2017, Afrana was promoted as supervisor of the house keeping department at the Radisson Blu Resort.

Afrana’s mother who once had a different view of education now has a positive and inspiring attitude towards all her children’s education. She is encouraging her other children to follow Afrana’s footsteps and to be independent. She is very proud of Afrana’s achievements.

We invited Afrana to share her story with the students and parents at this year’s Awards function. Afrana was very shy to speak in front of the residents however, she left a lasting impression when she spoke confidently and was very articulate in telling her story.

She thanked the project founder Mr. Peter Drysdale and the Community Development Team for believing in her and encouraging her to live up to her potentials. She was very grateful for the support the project had and continues to provide to her and her family.

Afrana is a talented and hardworking young woman. She is truly and inspiration to other young people in the community.