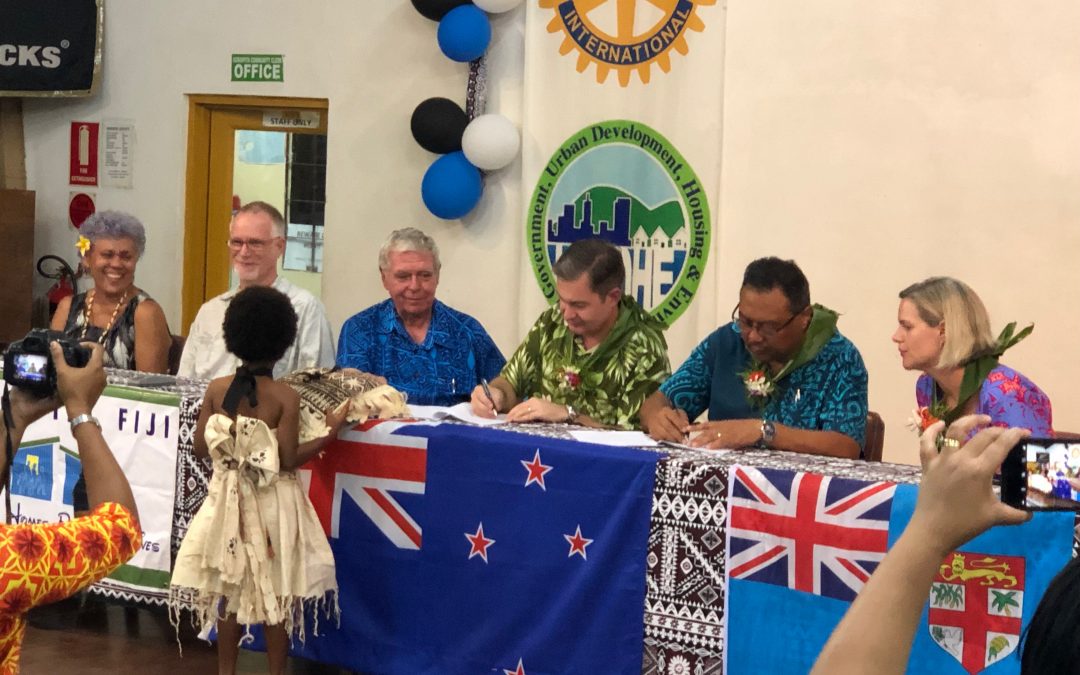 At the Koroipita community hall His Excellency Jonathan Curr New Zealand High Commissioner to Fiji and the Chairman of the Model Towns Charitable Trust Honson Cheer signed a new agreement for a grant to fund administration and community development for the next three years.

The residents gathered at the community hall to witness and celebrate the signing ceremony for this latest grant worth $1.7million.

New Zealand’s support began in 2005 and increased substantially with major grants in 2011 and 2016 that increased the housing estate to 241 homes at Koroipita where the population is now 1100 residents. High Commissioner Mr Curr acknowledged that this long standing relationship between New Zealand and the Trust is one born of the shared vision to provide affordable and resilient housing, to vulnerable families.

Chairman Honson Cheer also acknowledged the contribution of funding from Rotary International and individuals and the skilled input of nearly 2000 volunteers over the last 15 years. The project has now built a total of 979 homes in the Western Division to house 4400 people.

The new grant will support the administrative structure to plan and deliver the exciting capital works programme which involves the acquisition of 15 acres of new land and a serviced subdivision with another 145 houses. It also provides continuity for the holistic community development programme which is producing dramatic results.

The Trust is progressing plans for capital developments with the Fiji Government Ministry of Housing and Community Development, as a proposal for the next national budget. This will strengthen the three-way partnership. The extra houses would increase the estate to 386 homes with a population of nearly 2000 people.

The contributions from Government mostly for land acquisition in the past were acknowledged. The landowners of Vitogo (Matagali Matarasiga) have contributed greatly to the social housing solution for the country.

Resident Rotia Teai moved from Rabi Island to Koroipita with her family in 2017. She spoke on behalf of the people. She said that despite their different backgrounds the effective organizational systems enabled them to live as one big progressive family.

They will repay this help by working hard and ensuring that the children will succeed at school and move on to a brighter future.

The Chairman thanked the people of New Zealand for their generosity especially considering they have their own homeless and social housing challenges.