From Bus Stand To Model Town 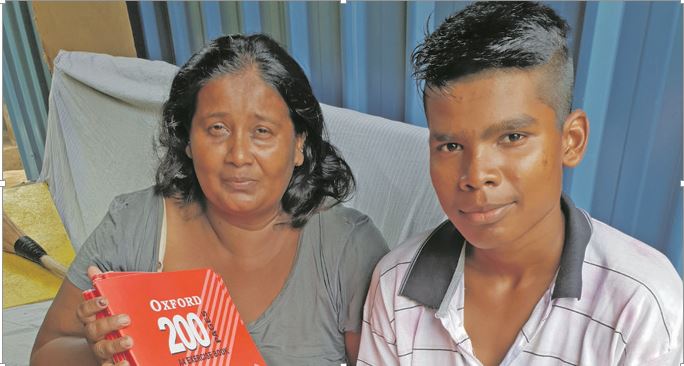 The Lautoka bus stand was once a home for Reshmi Devi Prasad.

Her situation was so dire that she and her son would sleep there when they had nowhere to go.

Such was the extent of their strug­gle.

The 39-year-old single mother lost her husband 15 years ago to kidney failure and from then she had no one to depend on but herself to sup­port her son.

Being a single mother and unem­ployed, it was hard to financially support her son, Samendra Ram, 17.

“I was renting at a home in Yolan­da Street in Lautoka and had to pay $80 every month for my rent,” she said.

“When my husband passed away, I had to see to my son’s upbringing.

“I was unemployed, my husband was unemployed, we had a son and you can imagine the hardship I was facing trying to look for an extra $80 every month for rent, an extra $30 for my bills when I was only supported by social welfare.”

It went on for a year.

“At times when we could not pay our rent, we would go to the Lau­toka bus stand and sleep there.

“I would find ways to collect mon­ey to pay our rent so that my son was given proper shelter. It was a struggle.

Today, she is thankful to individu­als at Koroipita Model Town in Nai­kabula, Lautoka, for taking her and Samendra in in 2013.

Last week they were among for­tunate families in Koroipita that received free books and stationery from the Foundation for the Educa­tion of Needy Children (FENC) Fiji.

Ms Prasad said it was a blessing to know that people out there still had the heart to help.

“I felt good knowing that there was someone out there who would come to me to give help, especially for my son’s education,” she said.

“My son wants to be an electrician and I am supporting him to achieve his dream. We have applied for a place at the technical college.”

“This is beneficial for them be­cause it helps reduce the financial problems for the families and it eas­es the burden for them,” she said.